Passing down a love of fitness by llavoie 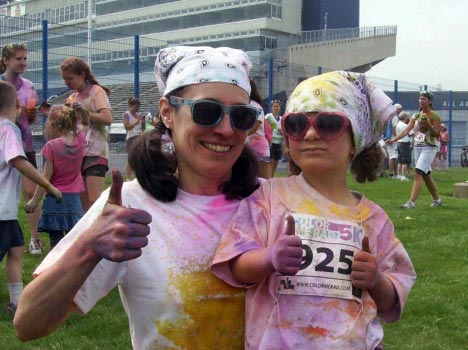 At 40-something I feel physically and mentally healthier than ever, and as a bonus I look better now than I did in my 20s AND 30s. The way I feel and look is due in large part to using exercise videos, especially Cathe’s since I own quite the collection. Let’s just say that with the amount of Cathe videos I own I have no issues of boredom that sometimes happens to avid exercises.

In following the advice of changing routines to avoid plateaus, I have tried a couple of Beach Body routines, but honestly I felt like I lost the muscle tone that I had quickly gained with Cathe. So, I decided it was best to stick with Cathe since she had been tried and true, but now in order to switch things up I create new rotations with the Workout Manager feature of the website. This feature allows me to use my favorite Cathe videos, which now includes the STS series and ALL 10 DVDs of her latest low impact series.

Being physically fit has allowed me to pursue other great challenges including a full marathon, a half triathlon and child birth! After 3 hours of pushing I wasn’t even tired!! When I told the Dr. I had the stamina to continue she refused, saying, “Three hours is long enough.” Maybe for a non-Cathlete, but not for me. (Unfortunately, the Dr. wasn’t convinced.)

It was a proud moment for me when my 5-year old daughter asked me to workout and I realized that I had unconsciously instilled an interest in physical fitness in her. I continue to teach her about the importance of being active. In fact, we’ve actually done Cathe videos side by side and all the way through. Most recently, and for the first time, I ran a 5K with her. It was a great experience for both of us and one that I will hold most dear when I think about my accomplishments.

Just over a year ago, I began dealing with a major life change. Through the stress of divorce and adjusting to single parenthood, I continued to maintain my exercise routine. It was difficult many days, but I pushed forward knowing in the end I would feel better about myself. I am convinced that my Cathe collection helped me deal with stress that would have otherwise made me more tempted to use food to cope.

Now that things have settled back to normalcy, not only is being fit important for the things I need to take care of inside the house, but it has been beneficial in giving me the strength to take care of the outside of the house which has now been added to my “To Do” list.

As a single parent I have realized more, now than ever, the importance of “Me Time”. Using Cathe videos has made finding that time easy. I don’t have to find daycare, drive to a gym, or pack a bag. I simply turn on the baby monitor, put in the DVD and before I know it I’m done and feeling like I can take on whatever the day, or life, dares to throw at me.