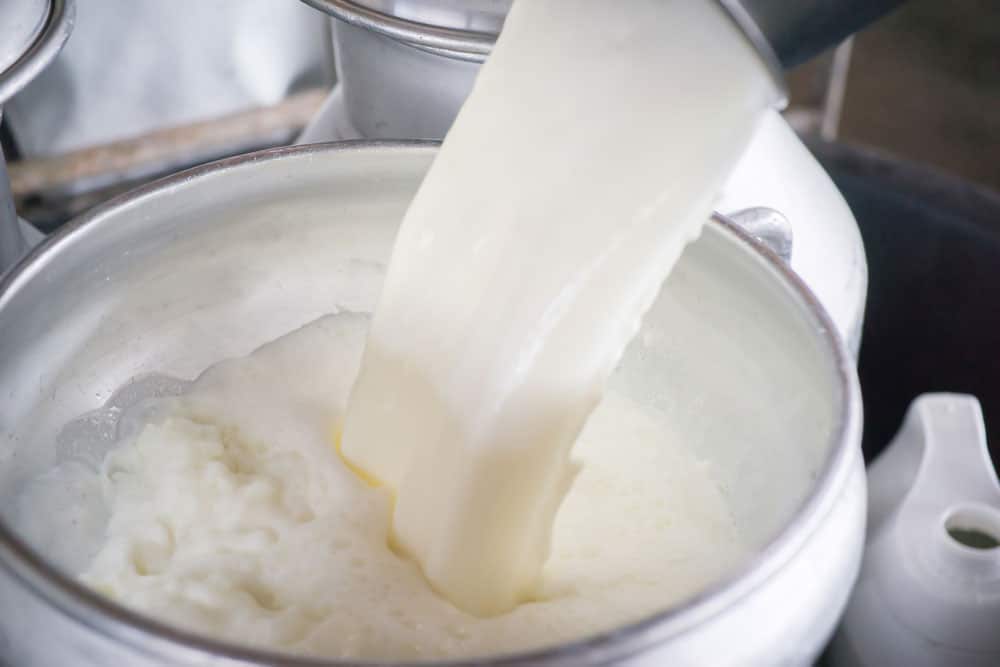 A common perception is that raw milk is healthier than milk that’s pasteurized. Pasteurization is the process that manufacturers use to kill bacteria and mold in milk before they package into cartons and containers. The goal of pasteurization is to reduce the risk of food poisoning or infection from drinking the milk and increase its shelf life. Who wants milk that goes sour after a few days?

To do this, manufacturers expose the milk to high heat to destroy harmful bacteria and other pathogens. Milk manufacturers also homogenize milk to break the milk fat into finer particles that give the milk a more uniform texture and taste and make it more palatable. Raw milk does not undergo pasteurization or homogenization.

Why Do People Think Raw Milk is Healthier?

Since pasteurization exposes milk to heat to destroy bacteria, one argument is that pasteurized milk contains fewer nutrients because heat destroys some vitamins. However, studies show that pasteurization only modestly reduces the nutritional value of milk, mainly by lowering levels of some B-vitamins and vitamin C. You can easily make up for this shortfall by eating a balanced, healthy diet. Minerals such as calcium, the reason many people drink milk, are not destroyed or damaged by heat.

Another reason people give for raw milk being healthier is people with lactose intolerance can drink it without experiencing digestive symptoms. Lactose intolerance is common among adults, especially older adults. As we age, we lose an enzyme called lactase that breaks down lactose, a milk sugar in dairy products, including milk, cottage cheese, hard and soft cheeses, yogurt, and ice cream. Why is this a problem? People who have low levels of lactose are lactose intolerant and experience nausea, diarrhea, cramping, or bloating when they consume too much lactose from dairy products like milk. The amount of milk a person has to drink to trigger symptoms varies with the individual and how much lactase their body still produces.

Raw milk contains lactose, but it also contains Lactobacillus, a bacteria that helps break down lactose. Theoretically, this could alleviate symptoms of lactose intolerance. Pasteurized milk lacks lactobacillus since the pasteurization process destroys it. However, studies show that people who consume raw milk don’t experience fewer symptoms of lactose intolerance than those who drink pasteurized milk.

Does Raw Milk Lower the Risk of Allergies?

Another claim is that raw milk is healthier for children and may lower the risk of allergies and asthma in kids There is some evidence to support this one. Some research shows that children who drink raw milk as opposed to pasteurized milk have a lower risk of developing allergies and asthma. The benefits seem to be greater when kids drink it during their first year of life. However, these studies are associational and don’t show causation.

Finally, raw milk contains enzymes that pasteurization destroys, but, according to the Centers for Disease Control and Prevention, these enzymes supply no additional benefits and aren’t necessary for adequate digestion or health.

The Downsides of Drinking Raw Milk

Even if raw milk modestly reduces the risk of allergies and asthma in children, there are some downsides to drinking it. Pasteurization has a purpose—to kill harmful bacteria. When manufacturers leave out the pasteurization step, they may leave you with milk that contains harmful pathogens.

Research shows unpasteurized milk can contain a variety of bacteria, some of which cause infection. Even ones that don’t cause infection in healthy people, can cause a problem for pregnant women, young children, the elderly, and those with weakened immune function. At the very least, you shouldn’t drink it if you’re pregnant or have a condition that affects your immune system’s ability to fight off illness.

In fact, research shows that over 80% of food poisoning outbreaks related to milk in the U.S. are from raw milk. These results aren’t surprising considering raw milk undergoes no procedure to destroy harmful bacteria. Infections associated with raw milk were more likely to be life-threatening or require hospitalization too.

The downsides of drinking likely outweigh the benefits. There are some potential positives for kids since allergies and asthma are common in children and drinking raw milk could lower the risk, although this isn’t proven. However, young children are also more likely to develop food-borne illness from drinking raw milk due to their immature immune system. According to the Centers for Disease Control and Prevention, between 2007 and 2012, 59% of outbreaks related to raw milk involved at least one child under the age of 5.

When you consider that pasteurized milk is almost as nutritious, there are few nutritional perks from drinking it raw. Adults are less likely to develop serious illness from drinking raw milk, but there aren’t many upsides to consuming it. It still contains lactose and the Lactobacillus in raw milk doesn’t seem to reduce the symptoms of lactose intolerance.

The best solution, if you have lactose intolerance, might be to choose a milk alternative, like coconut or almond milk, that contains no lactose. Although most are lower in protein and calcium, many are fortified with added calcium and other nutrients. Soy milk is non-dairy milk that has a protein content almost as high as milk. Explore your options, but don’t be too quick to buy a container of raw milk. It could have some unexpected surprises! Foodborne illness can be fatal in some cases, so consider the pros and cons before buying bottles of raw milk.

Dairy Milk: Are the Health Benefits All They’re Cracked Up to Be?

Is Organic Milk Healthier or More Nutritious than Conventional Milk?

Should You Be Concerned about Hormones in Dairy Foods?

Soymilk Versus Dairy Milk: How Do They Differ Nutritionally?