Is It Healthy to Cook with a Cast Iron Pot? 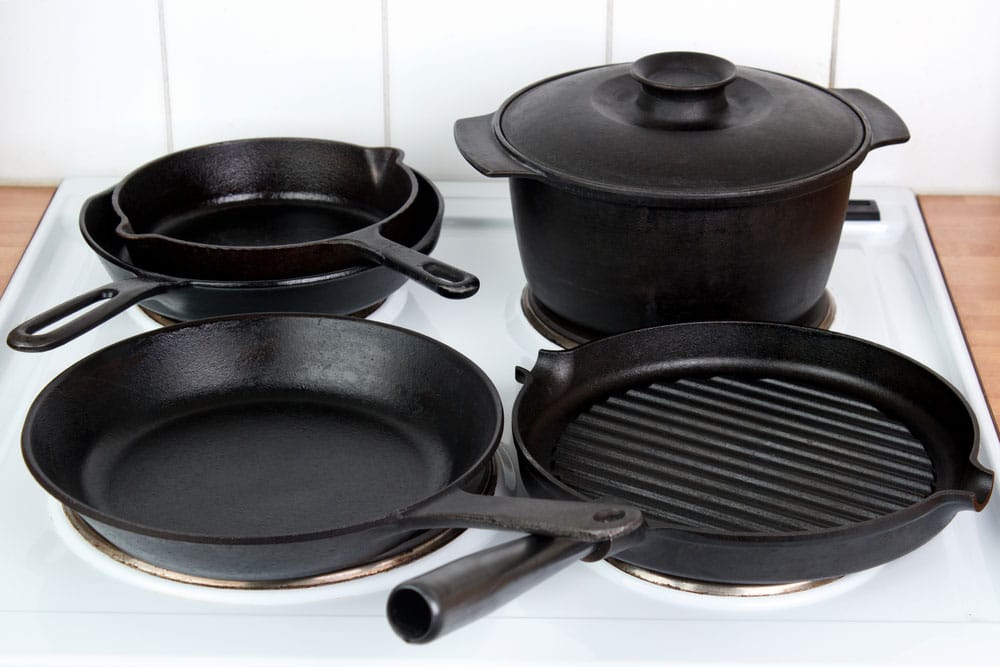 What’s your preferred cookware? More people are cooking with old-fashioned cast iron pots and skillets these days. They make it easy to prepare food and clean up and they lack the non-stick chemicals that have come under increased scrutiny these days due to their potential health risks – but are they the best choice? Let’s take a closer look.

One of the reasons people like preparing food in cast iron is the cookware increases the iron content of the foods you cook in them. Some of the iron from the cookware leaches into the food you prepare in these pots and skillets. In fact, studies show a cast iron skillet can add up to 5 milligrams of iron to what you’re cooking.

Do You Need the Extra Iron?

The amount of iron that ends up in the item you’re cooking depends on the type of food and how well-seasoned the skillet or pot is. However, the form of iron in an iron skillet or pan is the non-heme form and isn’t as well absorbed as heme iron from animal-based foods.

If you’re a pre-menopausal woman, the iron likely works in your favor since you lose iron monthly through menstrual periods. However, men and post-menopausal women can’t eliminate excess iron as  the body doesn’t have an efficient way to remove excess iron. At high levels iron is a prooxidant, meaning it can damage tissues by creating oxidative stress. Some studies link higher iron to a greater risk of cardiovascular disease and other health conditions.

Plus, some people carry one of the genes for hemochromatosis, a disease that causes increased iron storage. People who have the condition store excess iron in their liver and other organs and tissues and are at higher risk of early death. If they don’t get treated, hemochromatosis sufferers have a higher risk of liver toxicity, heart failure, arthritis, and certain type of cancer. You can carry a gene for this condition and not have obvious symptoms. It’s not wise to assume you need the extra iron, especially if you’re a man or a woman past menopause.

How You Season a Cast Iron Pot Matters

Seasoning an iron pot or skillet well reduces the amount of iron that leaches into the food you’re cooking by creating a barrier. Also, newer iron skillets and pots leach larger amounts of iron than pots that have been used for a long time.

If an iron skillet or pot is well-seasoned, less iron will transfer from the skillet to the food. To season an iron skillet, wash the pan and let it dry. Then, place a thin layer of vegetable oil in the pot or skillet. Now bake the skillet for one hour in an oven at 375 degrees F. When it comes out, the pan is seasoned and there should be less leaching of iron into food when you use it.

The main purpose of seasoning is to provide a barrier against moisture, which can lead to rusting, and create a non-stick surface so foods won’t stick when you prepare them. The good news is seasoning provides a healthier, non-stick barrier than buying a non-stick pan with a chemical coating. Although most non-stick cookware makers stopped using PFOA, a chemical in Teflon pans, they replaced it with PTFE, a chemical that’s supposed to be safer. However, it can still break down at high temperatures and create unhealthy fumes.

When you cook with a seasoned cast iron skillet, small bits of the oil layer you used to season it may flake off over time and enter the food you’re cooking. Since you expose the oil layer to heat, some of the polyunsaturated fats in the oil used for seasoning the pan can oxidize. Are those oxidized bits of oil a threat to health? There really are no studies showing one way or the other. If the amount is small, they’re probably not a health threat since your body has ways of dealing with toxic materials you’re exposed to in small quantities. But what if you use the skillet or pot every day? The combination of absorbing all that iron and the oxidized oil coating may not be healthy.

Cast iron skillets and pans have some advantages, especially the lack of a non-stick coating made of chemicals. However, the greater exposure to iron isn’t necessarily a benefit if you’re a post-menopausal woman or a man who doesn’t need the extra iron. Plus, there are theoretical issues, like the health effects of the oxidized oil used to season the cookware getting into the food.

If you like using cast iron cookware, season it well and don’t use it every day unless you’re iron deficient. Consider your age and gender too. If you’re a pre-menopausal woman, you’re more likely to benefit from the additional iron. Women past menopause and men usually don’t need more iron. If you don’t need the extra iron, stainless steel cookware is an option. Stainless steel pans contain iron, but they are coated in chromium oxide and that prevents leaching of iron into food.

How to Improve the Taste and Nutrition of Ground Beef