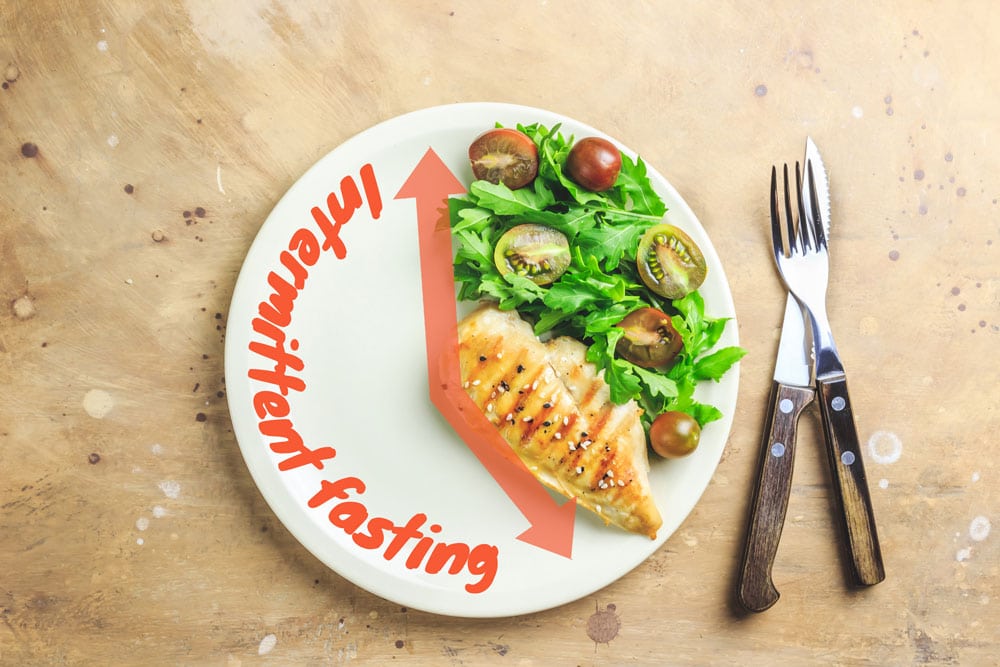 Intermittent fasting is growing in popularity, thanks to early studies suggesting that restricting the times we eat has health benefits. There’s no doubt that the average person eats too much and also some evidence that we eat too often. Most people eat three meals per day and supplement those meals with two or more snacks. That’s a lot of time eating! This also gives your body less time to “rest” between meals. The concept of intermittent fasting is based on the idea that periods of fasting give cells more time to rest and repair. Some studies even suggest it may slow the aging process.

What is Intermittent Fasting?

Intermittent fasting simply means abstaining from foods for periods of time. The way it’s structured can vary. With some plans, you only eat during certain times of the day. For example, you skip breakfast and eat a late lunch and early dinner, thereby extending the time your body isn’t processing food. Another approach is to fast for a day and then eat normally, alternating back and forth. This is called alternate-day fasting.

One of the most popular ways to approach intermittent fasting is the 16/8 structure. You eat during an 8-hour window period and fast the other 16 hours. During fasting, you can have water and other beverages without sugar or calories but no food. During the other 8 hours, you eat normally.

One reason people fast intermittently is the belief it’s a healthy practice. For example, studies show intermittent fasting lowers blood insulin and boosts growth hormone, both of which increase fat burning and fat loss.  The break that fasting gives your body also makes it easier for cells to repair and remove toxins and waste products. Some rat studies also show that alternate day fasting prolongs lifespan.

Another reason people do fast is to lose weight. The idea is that during fasting, insulin levels drop and this makes it easier for your body to use stored fat as fuel. Is there evidence that intermittent fasting is effective for weight loss?

In one study, researchers asked a group of healthy adults between the ages of 18 and 64 to take part in a fasting study. They assigned the adults to one of three groups:

In another study, researchers asked 23 healthy, obese participants to take part in an intermittent fast. The participants ate as much as they desired for 8 hours each day (10:00 A.M. to 6:00 P.M.) and fasted for the other 18 hours.

Did they lose weight? The subjects in this study lost an average of 9 pounds over 3 months. They also experienced improvements in some markers of health, including a drop in systolic blood pressure.

Other studies also show that restricting eating to certain time windows reduces calorie consumption. So, intermittent fasting can lead to weight loss but not fast or dramatic weight loss. In the study above, participants lost 3 pounds per month. That’s a significant but rather modest weight loss.

The Downsides of Intermittent Fasting

Animal studies suggest intermittent fasting could prolong life but we’re a long way from proving that in humans. However, studies that have looked at biomarkers in humans, including markers of oxidative stress, suggest possible benefits. Fasting places mild stress on the body and that upregulates natural defense mechanisms that may protect cells and tissues against oxidative stress.

If you have diabetes, hypoglycemia, a history of an eating disorder, or other health problems, don’t fast until discussing the pros and cons with your physician. It’s also important not to fast if you’re pregnant. For most people, a 16/8 hour intermittent fast is easiest to stick to. You would eat only during an 8-hour period every day and fast during the other 16 hours. Even during the 16-hour fast, drink plenty of sugar and calorie-free beverages, preferably water. Most people do a 16/8 fast by eating an early dinner and skipping breakfast the next morning. During the 8 hours that you’re not fasting, choose nutrient-dense foods and avoid junk food altogether.

Intermittent fasting, particularly intraday fasts where you eat for a certain number of hours and fast the rest can help with weight loss as it reduces calorie consumption. Plus, it may offer other health benefits. However, it won’t lead to dramatic weight loss, based on studies so far. Weight loss with this method is modest, so do it for the other potential health benefits if you do it at all.

Are There Downsides to Intermittent Fasting?

5 Things to Do When Your Eating Habits Get Off Track