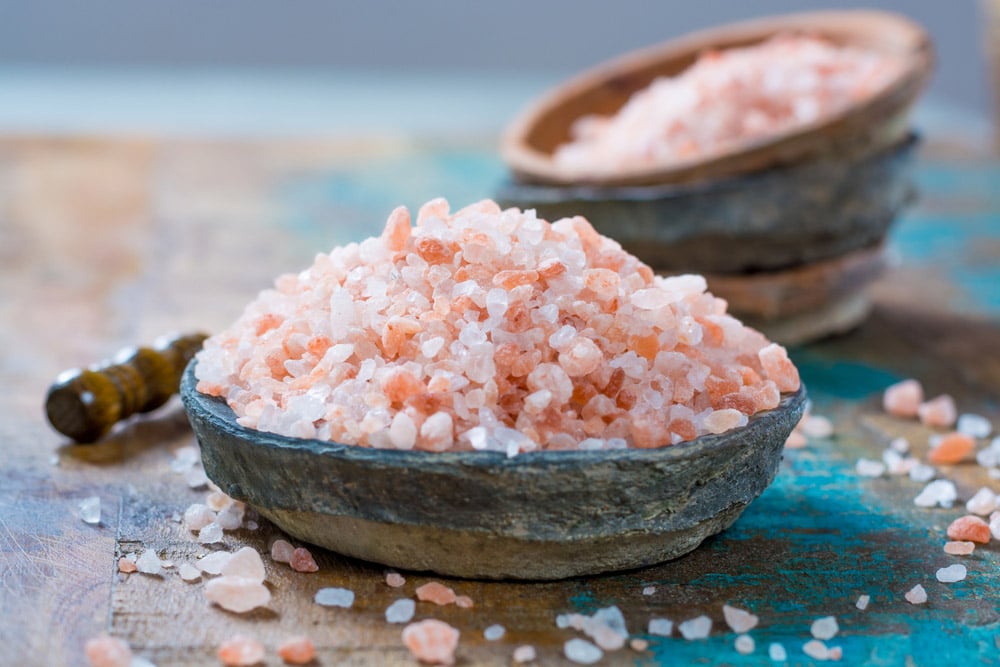 Food trends come and go online. Who can forget past trends like goji berries and bone broth? Sometimes, a food or dietary component suddenly takes on superfood status, and information circulates over social media about how healthful it is. However, you should always take over-hyped foods and supplements with a grain of salt, in this case, literally. That’s because not all the claims you hear and read about stand up to scrutiny. An example of one such dietary component that’s hot is Himalayan sea salt. What is it and is it better for you than table salt?

What is Himalayan Sea Salt?

Himalayan sea salt is a pink-colored salt that comes from mines in the Himalayan mountains. Like other salts, it adds flavor to food, but the reason people claim it’s healthy is that it has a higher mineral content relative to table salt. In fact, the pink color comes from the iron it contains. However, when you scrutinize the quantity of minerals in Himalayan sea salt, although higher than table salt, it’s still quite small.

For example, table salt has just under a milligram of potassium while Himalayan sea salt has almost 3 milligrams of this important electrolyte. It also has about a milligram of magnesium compared to a trace amount in iodized salt. Still, the modest quantities of these minerals won’t go far toward meeting the recommended daily intake of these minerals, especially when you compare it to the mineral content of many plant-based foods.

You may hear claims online that Himalayan sea salt has certain health benefits. Some of these include anti-aging benefits, better sleep, and improvements in blood sugar and lung function. However, there are no studies to support these claims and it makes little sense because Himalayan sea salts don’t contain enough minerals or other components to have health benefits.

In fact, iodized sea salt contains something Himalayan sea salt lacks, iodine. The standard salt you buy at the supermarket is iodized to increase its iodine content. Your thyroid uses iodine to make thyroid hormones that regulate your metabolic rate. You need a certain amount of iodine to make these hormones, but too much can cause thyroid dysfunction too. Getting enough iodine is critical during pregnancy as you need a certain amount for proper fetal development.

If you consume only sea salt, make sure you’re getting iodine from other sources. Some of the best iodine-rich foods are sea vegetables, dairy products, and fish.

A Downside of Himalayan Sea Salt

Himalayan sea salt has somewhat of a health halo. We perceive that it’s healthier than processed table salt, but there are concerns about consuming a lot of it. Testing shows that Himalayan sea salt contains minute particles of plastics called microplastics from pollution in the waterways. That’s a concern because research shows some components in plastic are hormone disruptors, meaning they can affect how hormones work. The quantities in Himalayan salt are small but if you consume lots of it, it could build up in your body and no one knows the long-term consequences of this.

Himalayan sea salt isn’t a superfood and there’s little evidence to support the claims people make about its health benefits. It’s less processed than table salt, but it also lacks the iodine you get from table salt because of the ionization process. People who consume little or no iodized salt are at higher risk of an iodine deficiency since many foods are not a good source.

The mineral content of Himalayan sea salt is also overstated. It may contain more than table salt, but the quantity is still far lower than what you find in many plant-based foods. If you’re using Himalayan sea salt as a primary source of minerals, you won’t get very far. Get your minerals from food instead. If you like the taste of Himalayan sea salt or enjoy the way the pink color makes your dishes look, enjoy it in moderation. However, it would be more beneficial if you alternate it with iodized table salt, so you’ll get enough iodine or get iodine by adding more sea vegetables to your diet.

If you have sodium-dependent hypertension, where your blood pressure goes up when you consume more salt, Himalayan sea salt will impact your blood pressure too, despite its perceived lower sodium content. Now you know that it contains roughly the same volume of sodium by weight as table salt.

Finally, be aware of the possible risk of microplastic contamination if you consume sea salt regularly. If you use it in small amounts, the low levels of microplastics might not be a problem, but don’t douse your food with it every day, nor should you need to. Learn to enjoy foods in their natural state without adding salt.

Don’t forget, you can also add flavor to your food with spices such as turmeric, cumin, garlic, ginger, cinnamon, and rosemary, all of which have anti-inflammatory activity. For people who must eat a low-sodium diet, these can make food tasty and appetizing. Enjoy!

How Does Sea Salt Differ from Table Salt?

Will Switching to Sea Salt Lower Your Sodium Intake?

Does a High-Sodium Diet Increase the Risk of Heart Disease?

Are Salt Substitutes Better for You Than Salt?