Exercise is Healthy for Your Bones, but Not When You Restrict Calories 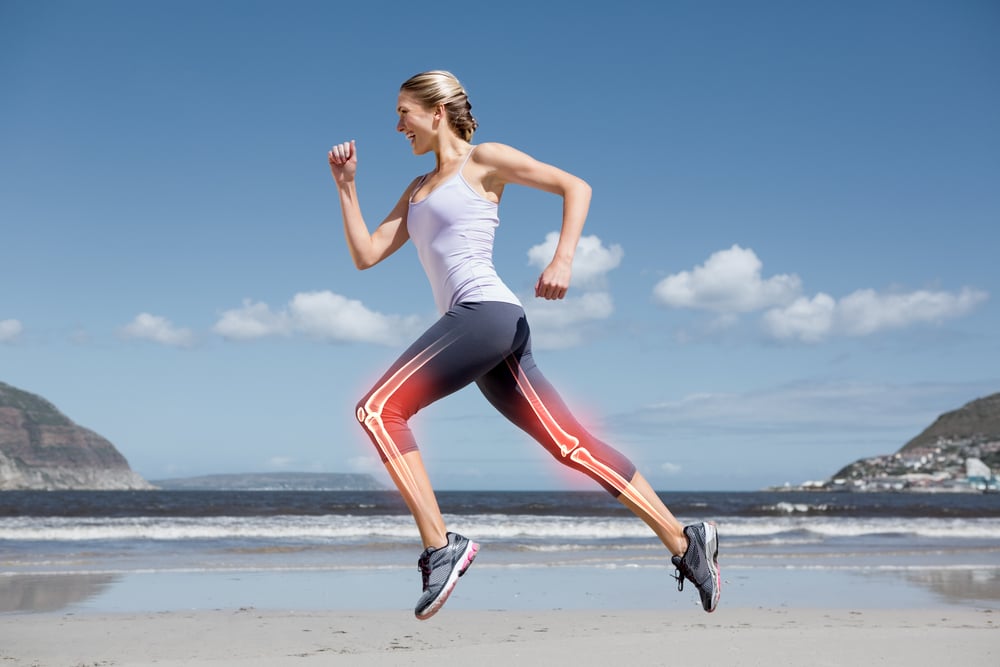 Keeping your bones healthy and lowering the risk of osteoporosis is one of many reasons to work up a sweat. Exercise stimulates bone-building cells called osteoblasts to lay down new bone tissue. However, not all workouts are effective for building bone mass. The best type of workout is high-impact exercise where both feet leave the ground at the same time. For example, running is a high-impact exercise, but cycling and swimming are not since the bike and the water you’re swimming in supports your weight. Strength training also stimulates the production of new bone if you lift a weight that’s heavy enough.

The earlier you start working out, the better. You lay down the bone tissue that you’ll need for a lifetime during adolescence and early adulthood. In fact, you reach your maximum bone density by your early 20s. At this point, the focus shifts to maintaining it, although some studies suggest we can modestly boost bone density during adulthood. However, it’s best to begin exercising during childhood and adolescence to maximize bone health.

As powerful as exercise is for building and preserving bone mass, combining exercise with calorie restriction may not be a good combination, as a new study suggests. This study was carried out in mice but may apply to humans too. One way you judge the health of a bone in mammals is by how much fat the marrow contains. Higher fat inside the marrow is a marker of how dense and strong a bone is. With this knowledge, researchers looked at the impact exercise and calorie restriction has on the amount of fat in the bone marrow of mice.

One group of mice ate a regular diet while another group ate a calorie-restricted one. The calorie restriction was equivalent to a 30% reduction in calories needed for maintenance. It’s not uncommon for humans to restrict calories to this degree when they’re trying to lose weight. Some mice in each group also exercised. By the end of the 6-week study, the mice that exercised while they ate a reduced-calorie diet showed an increase in bone marrow fat along with other markers of worsening bone quantity.

It seems that exercise and calorie restriction, at least in mice, isn’t good for bone health. But what about calorie restriction alone? Another study, this time in humans, followed 218 healthy, non-obese adults with an average BMI of 25. One group ate a normal diet without calorie restriction and the other restricted calories by 25%. By the end of the study, the group that calorie-restricted showed greater loss of bone density in the hips, lumbar spine, and neck of the femur than did the control group who didn’t restrict calories. They also showed greater markers of bone breakdown.

Other research shows that people who lose substantial amounts of weight also lose bone mass. In contrast to the mouse study above showing that calorie restriction and exercise increase bone loss, some studies show that exercise can prevent bone loss in people who lose weight.

In one study, researchers asked 46 middle-aged and older women and men to cut their calorie intake by 20%. This degree of calorie restriction is a bit less stringent than the 30% calorie restriction the mice in the earlier study were subject to. Half of the group who restricted calories worked out on their lower calorie diet. The other half didn’t.

The results? Both groups lost weight, as you would expect on a calorie-restricted diet. However, the group who cut calories and didn’t exercise also lost bone mass. This suggests that exercise, when you’re trying to lose weight, helps prevent bone loss. The results are in direct contrast to the mouse study that showed MORE bone loss with exercise and calorie restriction. One difference, other than the study participants, being mice vs. humans is that calorie restriction was less pronounced in the human study, 20% vs. 30%.

So, does exercising during calorie restriction aid or hinder bone loss? Exercise is a stimulus for bone-producing cells called osteoblasts to lay down new bone tissue. That’s a good thing! But if you restrict calories too much, you may not take in enough nutrients and micronutrients to support bone building. Some of the macronutrients and micronutrients you need for the laydown of new bone include protein, calcium, vitamin D, magnesium, potassium, phosphorus, and fluoride. Plus, you need vitamin K, vitamin A, vitamin C, B-vitamins, iron, zinc, copper, and manganese for other metabolic pathways that support bone health. Therefore, the making of new bone is an energy and nutrient demanding process.

What can we conclude? Excessive calorie restriction, especially if you aren’t eating a nutrient-dense diet, is likely harmful to bone health, whether or not you exercise. Exercising while cutting back on calories can deplete energy resources that your body needs for building new bone. On the other hand, high-impact exercise and strength training provides a stimulus for your body to lay down new bone. If you’re trying to lose weight, don’t reduce your calorie intake by over 20% and include exercise in your routine. Make sure you’re eating a nutrient-rich diet to supply the support your body needs for healthy bone metabolism. It’s even more important to choose nutrient-dense options when you’re eating less. Empty calories from sources like sugar won’t cut it!

Also, you can lose muscle along with bone when you lose weight through calorie restriction alone. Make sure you’re strength training to hold on to as much muscle as you can while losing body fat.

Is Crash Dieting Harmful to Your Heart?

Why It’s Time to Take a Break from Dieting

What is Metabolic Compensation & How Does It Keep You From Losing Weight?

6 Reasons Dieting Doesn’t Work and What Does