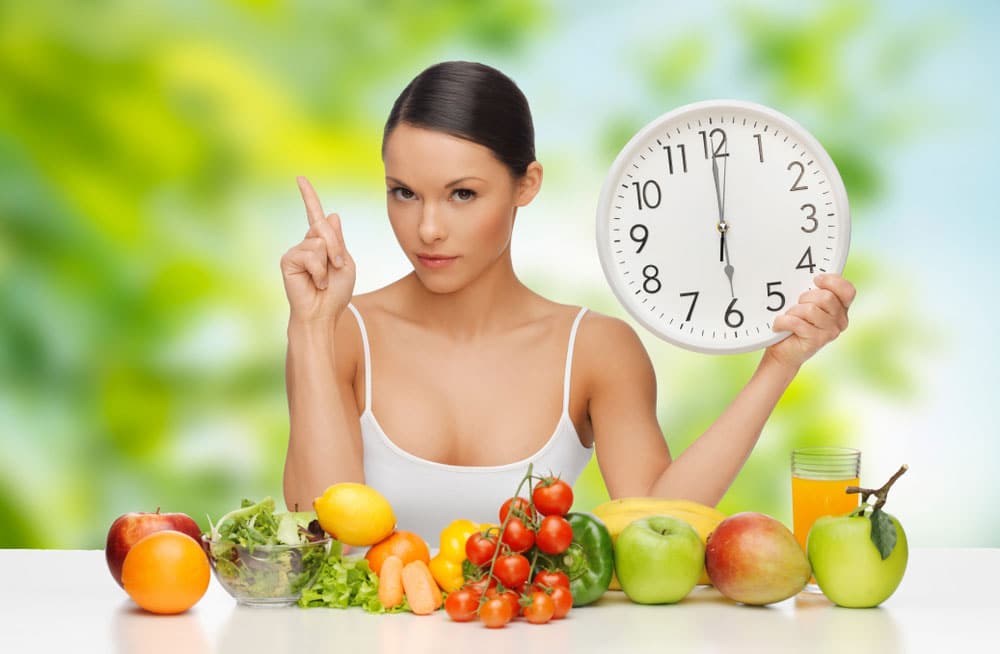 If you’re trying to lose weight, you probably focus on what you eat and how much you put on your plate. Smart! Diet quality and portion size are both factors that impact body weight. Diet quality is important for health too. A study in the Journal of the American Medical Association found that a poor diet can explain more than 45% of all deaths due to cardiovascular disease, stroke, and diabetes. These days, however, there’s a growing interest in what role when we eat plays in weight control.

We know that many bodily functions, including the release of hormones, are regulated by an internal biological clock. This clock runs on a 24-hour cycle and is influenced by when your eyes are exposed to light. So, it’s not a stretch to say that our bodies are better equipped to process food at certain times of the day as opposed to others.

Expounding on this idea, there’s an interest in time-restricted eating, consuming food during set hours rather than throughout the day. It’s a variation on another trend, intermittent fasting. Both eating styles center on the idea that our bodies need a rest from processing food, and that fact that it may be better able to deal with food at certain times than others. Most people practice this style of eating by consuming food during a designated time period, usually 8 to 10 hours. In other words, you could consume meals from 8 A.M. to 6 P.M. (a 10-hour feeding window) and shut the kitchen down after 6:00 P.M until the next morning.

What Are the Potential Benefits of Time-Restricted Eating?

Preliminarily, scientists think that time-restricted feeding helps with weight control and makes it easier for people who are obese to lose and maintain healthier body weight. But eating during restricted hours of the day may have other benefits, too. For example, some research suggests that it might slow the aging process by reducing oxidative stress. In mouse studies, mice that fast more live longer and enjoy better health than those who eat frequently, irrespective of what they eat and how many calories they consume. In fact, mice that ate once per day enjoyed the best health and had the longest lifespans. Why might this be? One theory is that longer gaps between meals allow systems that repair cellular damage to function more effectively.

Most of the studies have been carried out with fasting and intermittent fasting, although there some ongoing trials looking at time-restricted eating. A 2017 study published in JAMA found that subjects who fasted every other day lost between 3 and 8% of their body weight and this approach was as effective as restricting calories in the more traditional manner. The participants also experienced improvements in insulin sensitivity and blood lipids.

The beauty of time-restricted feeding is that it may offer the benefits of fasting but is easier to do. Not everyone can deal with eating every other day, but most of us can handle only eating during a 10-hour time period.

In another study, researchers divided mice into groups. Both groups were offered unlimited amounts of high-fat and high-sugar foods. One group of mice ate their unhealthy food over a 24-hour period while another group had restricted feeding times and ate only within an 8-hour window. Though both groups of mice ate a similar number of calories, the ones that ate throughout the day became obese and ill while the time-restricted mice stayed healthy and avoided weight gain.

More recently, a 2018 study found that humans who ate on an 8-hour time-restricted schedule lost 3% of their body weight without intentionally counting calories. What’s more, they experienced a significant drop in their systolic blood pressure relative to the control group.

Why is Time-Restricted Feeding Beneficial?

As mentioned, hormone release and cellular processes are driven by circadian rhythms under the control of a central biological clock in your brain. This clock is set up to maximize efficiency. As such, your body is best adapted to handling carbohydrates during the day when you’re active and less so when at night when you normally sleep. Thus, insulin sensitivity is higher during the day. At night, insulin sensitivity declines and your body must work harder to process glucose and keep your blood sugar from climbing too high after a meal or snack. Therefore, time-restricted feeding may improve metabolic health and blood glucose control. That’s important since good insulin sensitivity and blood sugar control is important for preventing a number of chronic diseases, including type 2 diabetes, cardiovascular disease, and some forms of cancer.

Should You Try Time-Restricted Eating?

Time-restricted feeding is more manageable than long periods of fasting because you aren’t deprived of food for long periods of time. If you eat during a 10-hour window period, the longest you’ll go without eating is 14 hours. Plus, you spend part of the time sleeping. In fact, some people who eat during a window period actually feel less hungry. However, you shouldn’t do any type of fasting or time-restricted eating if you have health problems or are taking medications. Talk to your physician first and get their okay. If possible, shift your eating window toward the earlier part of the day. For example, eat between 9 am and 5 pm if you’re using an 8-hour window or 9 am to 7 pm if you’re using a 10-hour window. You can do this by eating a late breakfast and an early dinner and not snacking after dinner.

Even though time-restricted dieting doesn’t dictate what to eat, stick to whole foods with lots of fruits and vegetables rather than junk. Focusing on good nutrition is a tried and true way to stay healthy!

·        JAMA. “Association Between Dietary Factors and Mortality From Heart Disease, Stroke, and Type 2 Diabetes in the United States”

·        American Heart Association. “Time-restricted eating is growing in popularity, but is it healthy?”

Why You Should Eat Your Carbs with Protein

Late-Night Eating: Does It Increase Your Risk for Weight Gain?

Late-Night Snacking: What Triggers the Urge to Snack at Night?

How to Stop Eating after Dinner and Avoid Weight Gain

Does When You Eat Your Meals Impact How Much Weight You Lose?