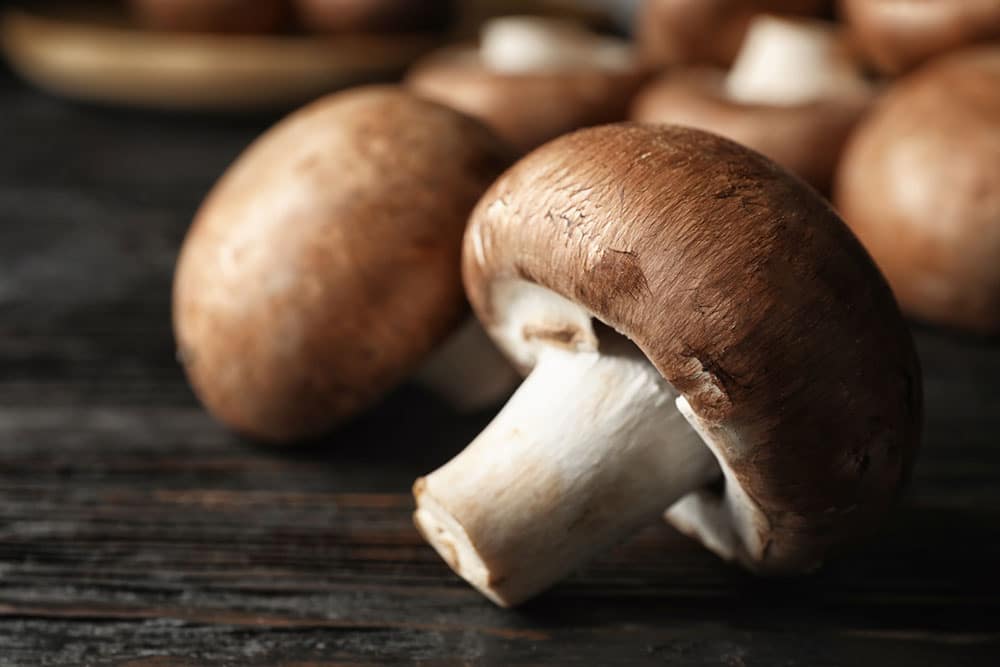 Are you a mushroom fan? No wonder! They’re versatile and provide your body with key nutrients. Plus, they’re versatile enough to enjoy a variety of ways, sauteed or in soups, stews, or salads. There’s also growing evidence that mushrooms have health benefits. Some research even suggests that adding more mushrooms to your diet could protect against cognitive decline and improve brain health.

What Research Shows about Mushrooms and Cognitive Decline

A six-year study looked at the eating habits of 600 Chinese seniors, including how often they ate mushrooms. What they found were seniors who consumed at least two servings of mushrooms (one serving is ¾ cup) each week had a 50% lower risk of developing mild cognitive impairment. (MCI)

What type of mushrooms did the subjects in the study consume? The most common were shiitake, oyster, golden, and white button mushrooms. The researchers believe the type of mushroom doesn’t make a difference and that all mushrooms offer similar benefits.

By now you’re probably wondering what component of mushrooms explains these findings.  The researchers believe a compound called ergothioneine, abundant in mushrooms, may account for the benefits. Ergothioneine has strong antioxidant and anti-inflammatory activity that may explain its potential brain health benefits.

You’ can get ergothioneine by eating any type of store-bought mushrooms, including the inexpensive white, button mushroom. But according to the American Mushroom Institute, porcini mushrooms contain the highest levels of this antioxidant compound. But you can’t go wrong with any mushroom, even the common button mushroom.

Other Health Benefits of Mushrooms

Mushrooms don’t get the accolades they deserve. In addition to ergothioneine, mushrooms are rich in other key nutrients and bioactive compounds. For example, they contain selenium and glutathione, two key nutrients important for thyroid and immune health. Glutathione is a cell’s master antioxidant and plays an active role in preventing the type of cell damage that contributes to cancer and aging. Mushrooms are also a good source of some B-vitamins and potassium, a mineral that helps regulate blood pressure and heart rhythm.

Mushrooms exposed to ultraviolet light from the sun also produce vitamin D, making vitamin D a potential source of this vitamin that’s absent from most foods. You can even buy your own mushrooms and expose them to the sun to boost their vitamin D content. With mushrooms containing glutathione, selenium, and vitamin D, it’s not surprising they contribute to immune health.

In fact, a University of Florida study showed that people who ate 4 ounces of cooked shiitake mushrooms each day for a month showed improvement in the activity of their immune system. Blood tests documented a boost in one type of T-cell that fights infection, along with a reduction in inflammatory proteins.

Mushrooms also contain beta-glucan, a type of fiber that helps with blood sugar control and boosts satiety. You also get beta-glucan when you eat oats, oatmeal, bran, wheat, or barley. Eating foods rich in beta-glucan regularly may modestly lower cholesterol too. Plus, mushrooms are low in carbohydrates and high in fiber, so they won’t cause a sharp rise in blood sugar.

Along with their nutritional benefits, ergothioneine in mushrooms may be beneficial for brain health by protecting against oxidative damage that contributes to cognitive decline. Although the study doesn’t show cause and effect, only an association, the antioxidant benefits of ergothioneine and the fact it can cross the blood-brain barrier are encouraging.

Nevertheless, you can still enjoy the established health and nutritional benefits of mushrooms. Some people even use them as a meat substitute. You might have eaten a Portabella mushroom burger in the past! Although not as high in protein as meat, some mushrooms have a meaty texture when you cook them properly.

However, there is no single food that will protect against cognitive decline. Your best bet is to eat a variety of whole foods and lots of vegetables and fruits. But adding some mushrooms might be helpful too and you have many types to choose from. Why not explore the mushroom section the next time you shop for groceries?

HealthLine.com. “Are Mushrooms Good for You?”

Do All Mushrooms Have Health Benefits?

Are Mushrooms a Good Source of Plant-Based Protein?