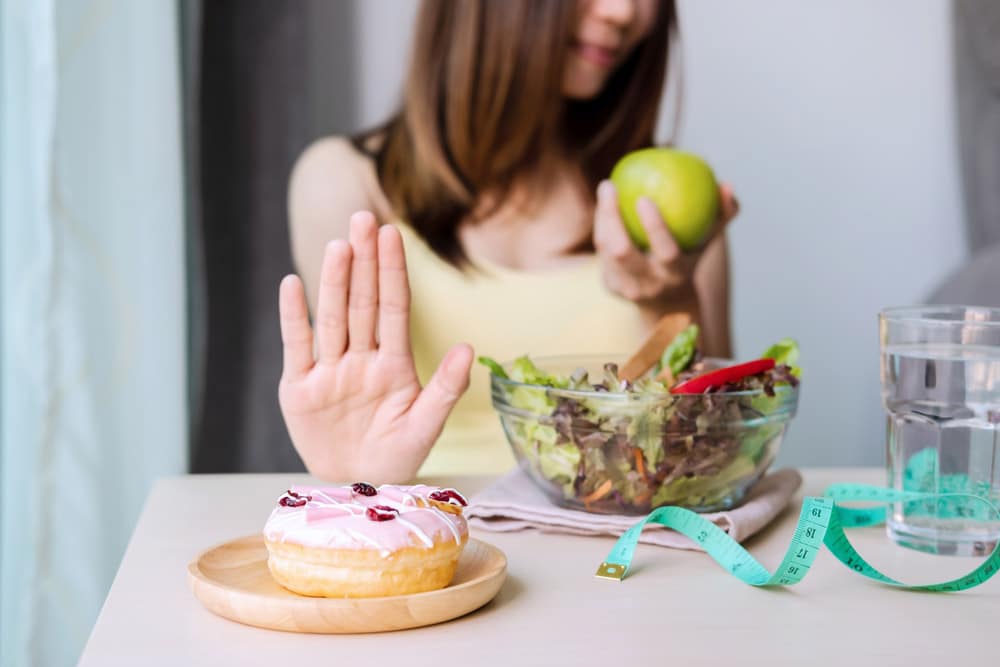 It’s clear that diet quality matters for health and longevity. One of the smartest moves we can make to boost our mental and physical health and improve our body composition is to eat more whole, unrefined foods and skip the ultra-processed junk, but society makes it hard! 60% of the food you find in grocery stores is processed fare.

The diet that has the strongest evidence of health and longevity benefits is the Mediterranean diet, an eating plan that emphasizes fruits, vegetables, whole grains, nuts, fish, and healthy fats, like the monounsaturated fats in olive oil. According to the Harvard T.H. Chan School of Public Health, studies show that the Mediterranean diet lowers the risk of heart disease and premature death by as much as 25%.

But there’s also strong evidence that people in Western countries eat too much. If you don’t believe it, look at the portion sizes in restaurants and how they’ve mushroomed!  A study from the University of North Carolina at Chapel Hill found that portion sizes in restaurants and in the home increased between 1977 and 1996. Hamburgers grew 23% in size, soft drinks expanded in size by over 50%, and even packaged snacks ballooned.  Obesity rates grew right along with it. It’s not surprising that obesity rates climb with increased portion size, as research shows we eat more when there’s more on our plate.

Beyond obesity, are there other health benefits to eating less? If there’s a strong model for longevity, it would be the traditional Okinawan people of Japan. Their traditional diet emphasizes plant-based foods, but they have another guiding philosophy. Eat until you’re 80% full. In fact, the people of Okinawa eat almost 40% less than the average American does. They also have one of the highest percentages of men and women who live beyond a century. So, they must do something right!

The Possible Benefits of Calorie Restriction

Because eating less may promote health and longevity, some people adopt a calorie-restricted diet where they reduce their calorie intake by 10 to 40%. There’s even a calorie restriction society where calorie restricters connect and compare strategies. But is what they do backed by science?

In many animal species, calorie restriction increases lifespan by as much as 40%. They also have a lower rate of chronic health problems such as cardiovascular disease, cancer, and type 2 diabetes. While the benefits extend to most species, it’s not universal. Some breeds of mice didn’t experience an increase in longevity. However, even higher animal species, like the rhesus monkey, enjoy an increase in lifespan and a lower rate of age-related health problems.

As you might expect, human studies are more limited. However, there is a human study called the Comprehensive Assessment of Long-term Effects of Reducing Intake of Energy (CALERIE). In this study, 218 middle-aged, modestly overweight adults were assigned to two groups. One group ate 25% fewer calories daily relative to what they consumed beforehand. Another group did not calorie restrict. Restriction of calories by 25% was daunting for the participants, so they modified by cutting calories by 12%.

The results? At the end of the 2-year study, the group who calorie-restricted lost 10% of their body weight. They also displayed a drop in markers such as blood pressure, lipids, markers of inflammation that correlate with a higher risk of chronic health problems. Despite eating fewer calories, their sleep habits and mood improved too. On the downside, they showed a modest decline in bone and muscle mass and their aerobic capacity also decline a bit. However, the values were consistent with what you’d expect from the amount of weight they lost. Overall, calorie restriction didn’t disrupt their life. It also led to weight loss and improved some markers of health.

While the CALERIE trial suggests that restricting calories is safe short-term and appears to have short-term benefits, such as weight loss and improvement in health markers, the study was only two years long and that’s not enough time to understand what the long-term health effects are. But if you look at cultures like the Okinawans who eat less, it’s doubtful that modest calorie restriction of less than 20% of total calories has negative effects for a healthy person.

Some research shows that calorie restriction creates a mild stress on the body that activates a cell’s natural antioxidant defenses. So, reducing calories may counter oxidative stress and reduce inflammation, both of which are linked with aging and chronic health problems. Also, consuming fewer calories can reduce body weight and prevent obesity.

The key to getting the benefits of calorie restriction without the downsides is to get adequate nutrition. Restricting calories means eating less total food. So, the foods you eat must be nutrient dense to avoid nutritional deficiency. The CALERIE study also found that calorie restriction can modestly lower thyroid hormone, the key drivers of metabolic rate. Therefore, you could get a slowdown in resting metabolic rate, although participants in the study still lost weight.

Another consideration is the impact a calorie-restricted diet would have on exercise and exercise performance. To build muscle, you need a certain quantity of calories and protein. However, studies show that resistance training helps preserve lean muscle when people diet. If you calorie restrict, it’s even more important to do resistance training to prevent loss of muscle tissue.

You don’t have to adopt a calorie-restricted diet to get some health benefits. Eating more mindfully is beneficial too. When you’re mindful of the taste, textures, and aroma of what you eat you’re satisfied with less. Engaging your senses when you dine is one tactic to reduce overeating. Slow down when you eat and question yourself before grabbing a snack. Think before you bite! It can make a difference in your health.

All Calories Are Not Created Equal: Why Eating Less and Exercising More Isn’t Always an Effective Weight Loss Strategy

How Your Body Fights Fat Loss

Does Fruit Cause Weight Gain?

Are There Legitimate Ways to Boost Your Metabolism?