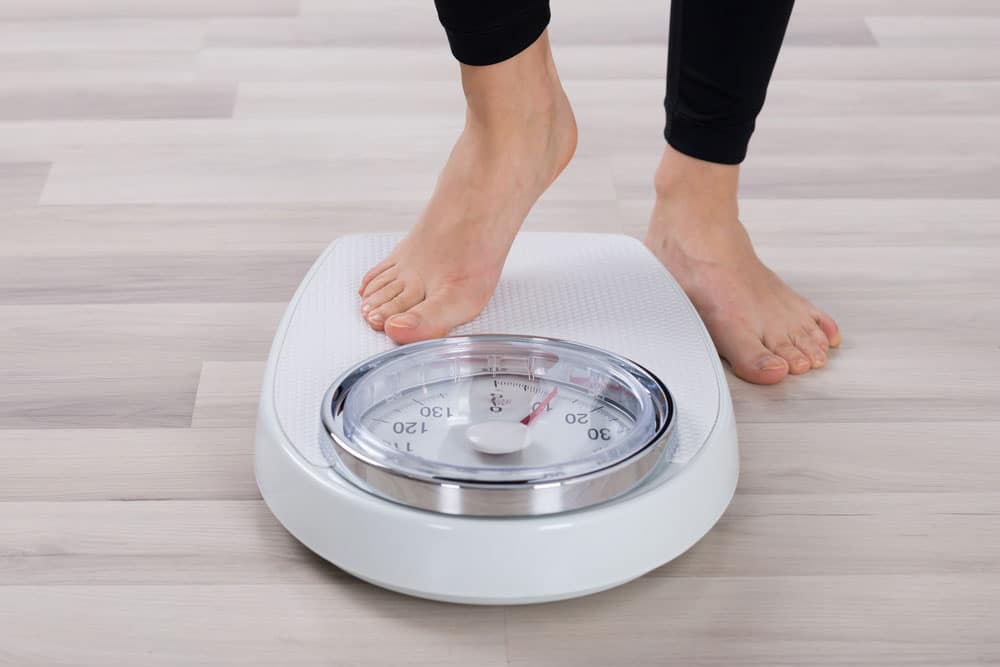 The number that pops up on the scale is one measure many people use to track how much progress they’re making with getting leaner. However, we shouldn’t place too much emphasis on the number that pops up on the bathroom scale. Body weight doesn’t tell the full story! However, it’s a useful measurement to follow if the goal is to lose weight. For the number on the scale to be useful, you have to weigh properly and understand what the number means. Are you making any of these mistakes when you step on the scale?

Weighing after a Workout

It’s tempting to head for the scale after a workout and check your body weight, but weighing after a sweat session doesn’t give you a clear picture of where you stand from a body composition standpoint. You can lose a significant amount of water weight during exercise and that will often show up on the scale. If you do a weigh-in right after a workout, it may reflect a lower body weight but don’t assume you’ve lost body fat. You can lose as much as three pounds of water weight during a long workout, especially if you exercise in a hot environment. But once you drink fluid, your body weight will return to its pre-exercise level.

Weighing after a Shower

Another time people often step on a scale is after a shower. This, too, can give you a false impression of what your weight actually is. According to Dr. Keith Kantor, a nutritionist, your skin can absorb several cups of water after a dip in a pool or a shower. The absorption of water can increase your body weight by a pound or two. So, resist the urge to shower and then weigh. In fact, the best time to weigh is the first thing in the morning after urinating and before drinking anything.

The standard bathroom scale measures total weight and that includes lean body mass, the weight of fluid in your body, and body fat. Therefore, it won’t tell you specifically whether you’re gaining or losing body fat. If you’re not working your muscles against resistance, the weight you lose may be lean body weight, including muscle. That’s not healthy weight loss! You can be a so-called normal BMI and still not be healthy. In fact, measuring waist circumference is a better indicator of health status than body weight. So, don’t place too much emphasis on the scale. Know your waist size too. If your waist is more than double your height, you’re carrying too much visceral fat and that’s a risk factor for chronic health problems.

Not Looking at a Weekly Average

Remember the fluid you drink and food you eat throughout the day can impact your body weight, sometimes by several pounds. If you eat a high-sodium meal, you can put on several pounds of weight that may stick around for several days. This can cause your body weight to be falsely elevated for several days in a row. If you look only at daily body weights, you may get a skewed picture. Rather than focusing on your daily weight, average it out over a week and record that value. Then track how this average changes over time. Remember, hormonal fluctuations due to the menstrual cycle can impact water weight. Certain medications can, too.

If you sometimes weigh at home and sometimes at the gym or work, you’re standing on different scales. Differences in calibration can be a problem if you’re consistently using the same scale. If you have your choice of scales, a body fat scale can be helpful. The more advanced ones can break down your weight into components–body fat percentage, bone mass density, BMI, body water percentage, and total body weight. Although these values aren’t necessarily accurate in an absolute sense, you can see day-to-day fluctuations if you step on the scale daily as soon as you wake up.

How often to weigh is controversial. Some sources recommend only weighing once per week, but if you’re trying to lose weight, daily weigh-ins may be of benefit. One study found that people who were trying to lose weight lost more when they weighed daily as opposed to less often. In fact, over six months, those who weighed daily lose 13 more pounds on average. The daily feedback that comes from daily weighings makes it easier to react to small gains before they become larger ones. However, you have to balance this with the fact that daily weigh-ins can be unhealthy for people with eating disorders. The scale, of course, should never become an obsession. The goal is not to be skinny but strong and healthy!

Not Relying Enough on How You Feel

How much you weigh when you step on a scale is only part of the story. If you reach your ideal body weight but you still feel tired and lack energy, you’re not in a healthy place. If so, it’s time to reevaluate what you’re doing to reach your goals. Maybe it’s time to step back and make sure you really are at your healthiest weight. Maybe, trying to reach that number on the scale isn’t best for your mental and physical health.

Hopefully, you have a better idea of how to weigh correctly now. It’s important to have a way to monitor your progress and whether you’re moving toward your goal, but don’t place too much emphasis on what the scale says. Also, don’t focus too much on daily weight fluctuations. Look at your average weight week over week. Be patient too! The goal is to get leaner in the healthiest manner possible.

What Are the Best Metrics to Measure Changes in Body Composition?

Body Weight, Bmi, Waist Size – Which is the Best Indicator of Health?

Is the Size of Your Waistline a Marker of Brain Health?

What’s the Best Way to Track Your Body Fat Percentage?

How Effective Are Skin-Fold Measurements for Determining Body Fat Percentage?