5 Superfoods That Don’t Live Up to Their Hype 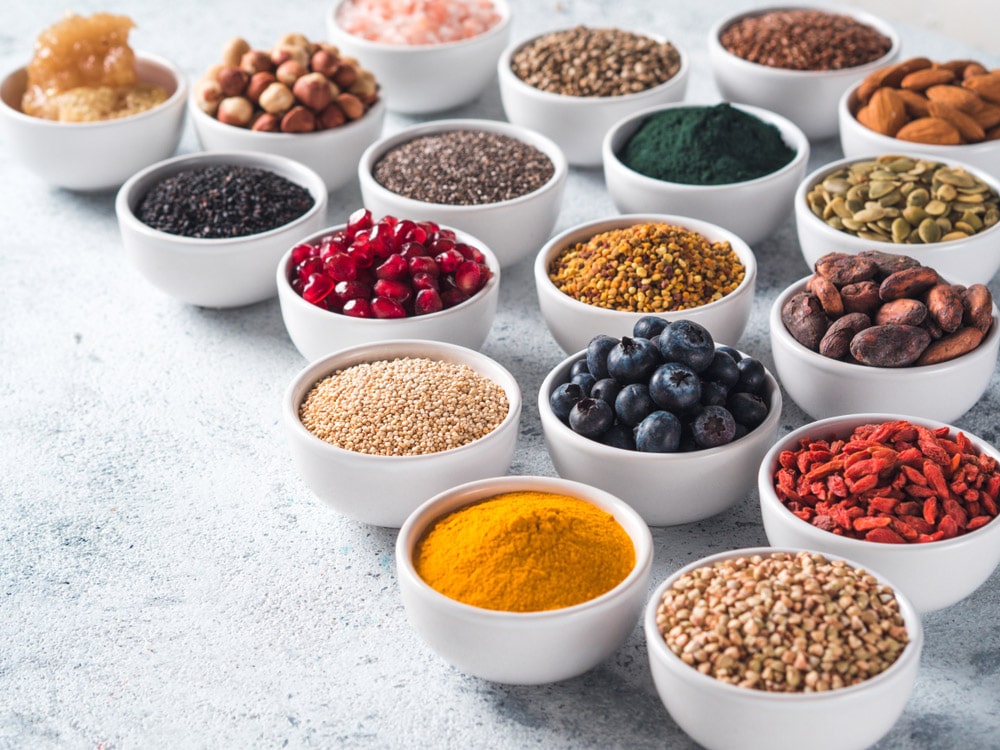 Are superfoods as “super: as they seem? It might surprise you to learn that there isn’t a standard definition for the word superfood. In fact, it’s just a marketing term that manufacturers use to increase the demand for such foods and make them sound more appealing. Food manufacturers use the term superfood so they can raise the price without causing sticker shock. However, not all of these overhyped foods are as “super” as they seem. Here are five that don’t live up to their hype.

A downside to drinking large amounts of pomegranate juice is the impact fruit juice can have on your blood glucose level. Juice is a concentrated source of sugar without fiber to slow absorption and that can trigger blood glucose spikes. Plus, some studies suggest that pomegranate juice, like grapefruit juice, can alter the metabolism of some medications, including statins. So, you shouldn’t drink it if you’re taking certain medications. Ask your physician about this.

Should you sip pomegranate juice? A better approach might be to enjoy whole pomegranate fruit. You’ll get the antioxidants along with a healthy dose of fiber.

Berries are good for us, right? Goji berries are a good source of vitamins, minerals, and antioxidants, but so are lots of other berries. Despite claims that goji berries fight cancer, lower blood pressure, reduce blood sugar, or boost immune health, these claims are unsubstantiated. In fact, there’s little research looking at their health benefits in humans.

Are goji berries worth adding to your diet? One study found that drinking goji berry juice gave subjects a greater sense of well-being but a company that markets goji berry juice sponsored the trial. On the plus side, these tangy berries contain zeaxanthin, a carotenoid that may protect the retina of the eye against damage. Plus, goji berries contain a full range of amino acids and have the highest protein content of any fruit.

If you enjoy goji berries and don’t mind paying more, eat them, but why not enjoy a variety of berries? There’s no evidence that goji berries pack more health punch than nibbling on a bowl of blueberries, another antioxidant and nutrient-dense berry.

Bone broth is another so-called superfood that has a strong following. One claim is that the collagen in bone broth improves joint health and prevents wrinkles. It’s true that bone broth contains collagen but that doesn’t mean it makes it to your skin or joints. Once the collagen enters your digestive tract, digestive acids and enzymes break it down into its component amino acids. At that point, your body uses the amino acids as it sees fit. In other words, the collagen you get from bone broth won’t necessarily end up as collagen in your joints.

But there’s another reason to be wary of commercial bone broth. A study found that the concentration of lead is higher in some commercial broth compared to the water from which it is made. That’s not surprising since lead is prevalent in the environment, and animals are exposed to it. Once exposed, they store the lead in their bones. When manufacturers boil bones in water to make bone broth, the lead can leach into the final product.

Coconut oil comes from the coconut fruit. Extra-virgin coconut oil contains medium-chain triglycerides, vitamin E, and polyphenols, all components that give it some advantage over other forms of saturated fat. However, it’s premature to call it a superfood. You may have read claims it helps with weight loss due to the way the body metabolizes it. Medium-chain triglycerides take a straight path to your liver where they’re quickly metabolized and used as an energy source but there’s no strong evidence that it does. In fact, one 4-weeks study where subjects consumed either butter, coconut oil, or olive oil each day found no significant difference in weight loss between the groups.

If you like the taste of sweet without the sugar, you might be tempted to add agave syrup to your tea or coffee. While agave syrup is low in glucose, it’s high in fructose. In fact, many brands are as high or higher in fructose and high-fructose corn syrup. Although they won’t spike your blood sugar, your body metabolizes fructose differently. Studies link fructose with a higher risk of non-alcoholic fatty liver disease, a growing epidemic that’s underdiagnosed. Your liver converts fructose to triglycerides that it releases into the blood. Research links elevated blood triglycerides with a greater risk of cardiovascular disease.

Worry less about buying the latest, trendy superfood. Instead, get the totality of your diet in order. Choose a variety of nutrient-dense fruits and vegetables and combine them with healthy sources of fat and lean protein. One superfood alone won’t cure what ails you or cause you to stop aging. One danger of adopting a superfood mentality is you feel like because you have that overhyped superfood in your diet, you can get by with eating more junk. Not so!  Focus on the whole of your diet and you’ll get far more return than you will from nabbing one superfood.

Do Superfoods Live Up to Their Claims?

Are There Really Foods That Fight Inflammation?

How Many Servings of Fruits and Vegetables SHOULD You Be Eating?